The dog has been getting kicked out of the bedroom at night lately. He's an old dog, and likes nothing better than sleeping flipped over on his back, on the thick dog bed next to our bed, now that we all live on one floor. He spends most of the day there, when he's not following Giselle around the house--the only thing the dog likes better than his bed is Giselle. I will grant that he has good taste in this.

But the dog also likes to pace, and to fluff that bed endlessly, most of the night. The pacing I understand. When I was a temporary stressed-out insomniac, I paced too. What else is there to do at that hour? But I didn't have those long nails that scrape across the hardwood floors here in the Bear Mountain House (floors that go everywhichway depending on the room you're in), and I wasn't pacing around a space that echoed quite the same way. The pacing bounces back off the high beamed ceiling again and again until it's a layered cacophony of pacing, some sort of strange avant-garde recording devoid of beat but not intensity or staccato. It's accompanied by his own frustrated sighs, that trill out through that long nose of his in gentle rapid-fire melancholy.

And the fluffing! I'm convinced that he's convinced that there's a perfect angle for that bed, something archetypal that will remove all of his dog aches and his dog stresses and leave him in the same mellow bliss he gets with his head in my wife's lap. (I get it too.) And so he's perpetually scratching and shifting the bed back and forth across the floor and the rug, up against the nightstand or half under the bed, folded and flat, twisted up like a cheap furred pretzel, lofted like a shredded wheat nugget.

So, he's getting banned. I feel guilty, since he is an old dog. And even more so since apparently he acts as a good earthquake barometer--he moaned and groaned before we had our first California quake tonight.

But: he sleeps right outside of the bedroom door on the hardwood now. I brought him another bed from the living room to lay on, and he does, but he faces the door all night. Watching and waiting, half asleep but half alert, too, so that should that door show signs of crack open, he'll be back in.
at October 30, 2007 1 comment:

It's about a half hour down the road--you wind out Bear Creek Road around a few S turns, and then head off onto Summit Road. Summit west of Route 17 is windy and narrow, down to one lane for a lot of its length, and it passes through a vineyard or two and an alpaca farm (where the hay is stored in an old shipping container), low hanging trees and a tree farm that's closed at the moment, but that has a set of train tracks that parallel the road for a minute or two and made the kids wonder.

Then it's down 17 south, to the coast. We took the kids here their first weekend, part of our California Brainwashing work: 'California has more toy stores than Virginia!' 'Wow, this California Mexican food is the best I've ever had!' (It was.) A trip to Powells Candy store in Los Gatos. You get the idea.

The kids were in a dreamy mood--the fuzzy aura of travel, where all the worries are taken care of by someone else, enveloped them, and we let them take money up to the counter and get their own cotton candy. After the rides, and more carnival food, we goofed around on the beach as the sun went down.

Overhead, the rides slowed to a stop. The ocean went calm and on the strip the teenagers coalesced into small, quiet packs, each in some sort of strange orbit of all the others. We wove our way between them to the car and headed back up into the hills.
at October 07, 2007 1 comment:

Monterey Bay, as seen from our deck 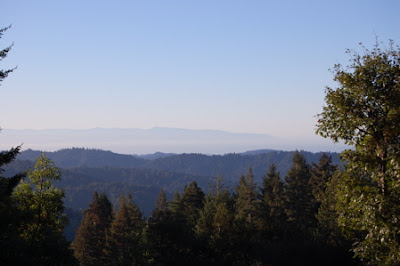 I've been wanting to post a picture of the view here for some time, and now that the stuff has arrived, including the camera and the cables to hook it into the Mac, I can.

Here's Monterey Bay, taken this morning, looking south from the deck of the house. The dark blur in the background is Monterey, the blue in the middle there is the water, and below are the closer mountains. At night, the whole coastline is dotted with lights all the way out to the end.
at October 06, 2007 No comments:

Fireball in the morning

This work is licensed under a Creative Commons Attribution-NonCommercial-ShareAlike 4.0 International License.