Surely you need a new Kindle? 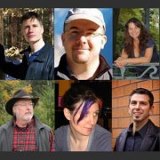 The Books on Fire contest, which runs through the end of December, is giving away a new Kindle Fire HD loaded with 13 books of science fiction, fantasy, and historical fiction (including mine!).

Sponsored by authors Judson Roberts, Ruth Nestvold, Luc Reid, William Hertling, Annie Bellet, and me, Books on Fire can be found on the Web at www.kindlebooksonfire.com . In addition to the first prize winner of the Kindle Fire, ten second prize winners will win three eBooks of their choice from the list on the contest Web page. To enter, participants simply announce their three top book choices from the book list through any of these methods:

eBooks included in the prize pool include:

See the contest Web site at www.kindlebooksonfire.com for full details.

Danger bird gets his own keyboard to wreck. @kiwi.biird