Bury me on a ferry

I've been captivated by ferries ever since setting foot on one here, where I am this morning, on vacation in the Puget Sound.  It was the mid-eighties, and I was a teenager and traveling then, too--living in a school bus with a bunch of other people for a year.  I was away from everything I'd known in my small corner of the world back east. 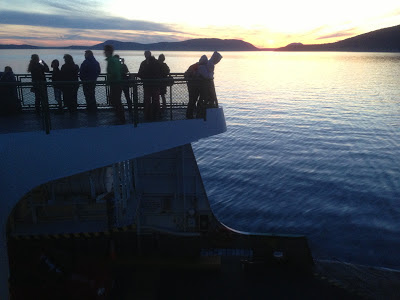 Something about them still gets me.  It's the size of them, the big industrialness of them moving through the water.  They're the biggest people-movers I've still set foot on and usually no matter how full they are, there's plenty of space left over.  You can drive trucks onto them.  Airstreams.

For very little money you can be front and center on your own cruise through fantastic islands, through fog and rain, with a lot of other strangers on the journey with you.  They're doing puzzles that are left on the table for someone else to complete.  They're reading, playing guitar, talking to their dogs.  They're sprawled on padded benches, sleeping, or getting coffee out of a machine. 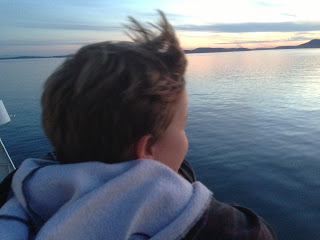 It's both nostalgia and falling in love all over again when I'm on one now, whether it's back here in the Puget Sound or back east, or somewhere in Asia.  (There's a great ferry that runs from Singapore to Indonesia, a quick hour's trip.  There are phenomenal green-and-white ships in Hong Kong that run from Hong Kong Island to Kowloon and back.)  I'm in transit, that happy state of quasi-limbo where you're heading somewhere, but not quite there yet.  I'm on the water, where I always like to be.

I always thought I'd live on an island someday and I won't rule that out yet, even though the mountains I call home right now are very much like islands in their own way.  If I do, I'll take a ferry to connect to the rest of the world, and take it to escape from it, too.

Anyone need a feather? Kiwi is happy to share.